The Epic of Evolution

The Epic of Evolution tells the story of the cosmos, of life, and of our human journey in meaningful and inspiring ways.

Diverse storytellers call this Epic by various other names, including:

The Epic of Evolution is the emerging cosmology of the universe based on discoveries from all scientific disciplines. While many people think of evolution solely in terms of biological evolution, the Epic of Evolution also includes the evolution of matter, stars, galaxies, human culture and imagination. This story begins with the Great Radiance (a.k.a. Big Bang) and tells about the emergence of energy, matter, galaxies, stars, planets, chemicals, life, symbiosis, human culture, and our dreams for the future.

The evolutionary epic is probably the best myth we will ever have. ~ Edward O. Wilson, biologist

The Epic of Evolution is more than just science. It is science translated into a story that gives meaning, inspiration and purpose to our lives. This is the story of our human origins. As a grand cultural narrative, it is like a myth that informs us of our place and purpose in the cosmos. It tells how the 13.8 billion year-old universe has come to know itself through the consciousness of human beings. For a growing number of people, the Epic of Evolution provides an interpretation of the scientific cosmology that is culturally and personally meaningful.  This cosmology gives people reason to celebrate their place and purpose in the evolving universe. It also provides a useful map with which to navigate into the future. People of all cultures, religions and philosophies understand this universal Epic because people from all cultures, religions and philosophies  contribute to the vast and growing mountains of evidence that support this story.


Dialogue between Science, Religion and Philosophy

Science and religion look at the same reality through different windows. ~ Freemon Dyson

The Epic of Evolution is a story that fosters dialogue between science, religion and philosophy.  This story helps us see that science and religion offer two windows on the same reality.

Like more traditional epic tales such as those found in religious texts, the Epic of Evolution can serve as a roadmap to help people effectively navigate through life. According to astrophysicist Eric Chaisson, “. . . the integrated, coherent story of cosmic evolution – a powerful and noble epic – can act as a viable intellectual vehicle to involve all our citizens as participants, not just spectators, in the building of a whole new legacy.”

Understanding the directionality of evolution opens the door of evolution to people of faith, who see God as the ultimate creator and sustainer of the universe. Although media headlines might suggest otherwise, for a growing number of people, the Epic of Evolution has the power to reconcile science and religion. To paraphrase Galileo, science tells us how the heavens go, religion tells us how we go to heaven.

Although it still leaves open the debate as to the definition of God, the Epic of Evolution fosters dialog between atheists, agnostics and people of faith. For example in November of 1997, scientists, philosophers and theologians gathered at the Field Museum in Chicago for the Epic of Evolution Conference sponsored by the American Association for the Advancement of Science (AAAS). Dialogue fostered by The Epic of Evolution is in part responsible for the emergence of the Clergy Letter Project and Evolution Weekend, an annual day of worship begun in 2006 in which over 400 churches of all denominations celebrated evolution as the means by which God created the Universe.

The Epic of Evolution contrasts starkly with Social Darwinism, in that the Epic of Evolution acknowledges cooperation and consciousness as forces in survival of the fittest.  (Paradoxically, Darwin wrote of the importance and fitness benefits of human empathy.)

The Epic of Evolution is an ancient idea based on long time observations that the universe and everything in it is constantly changing. For thousands of years, understanding the past has helped humans find meaning and purpose in this changing universe.

The details of the Epic of Evolution have been elucidated by thousands of individuals.  Those who have contributed to the understanding of this comprehensive epic include the following:

Outline of the Epic of Evolution

Following is a brief outline of major stages in the evolution of our universe.

To learn more about the various stages in the Epic of Evolution,  click here. 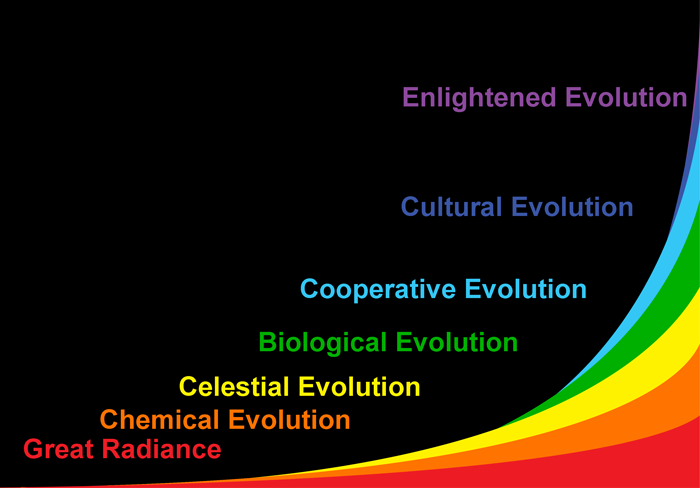