Seven Stages in the Epic of Evolution

How do you wrap your head around 13.8 billion years of cosmic evolution?

Don’t you have to have a deep grasp of physics, chemistry, biology, paleontology, anthropology, history and psychology and lots of other “ologies” to understand the story of our universe?  What are the major events in the evolution of the cosmos? How to we make sense of research from thousands of scientists contributing to the Greatest Story ever told?

Thankfully, thousands of scientists and teachers have contributed their deep knowledge so that you can reap the benefits of gaining an overview of this most amazing story.

At right is an outline showing seven stages of the Epic of Evolution.  Each new stage emerges from the stages that come before. So, for example, life emerges from the light, chemical and celestial stages that came before.  In turn, life becomes the stage for cooperative, cultural and enlightened stages that build upon it.   Like a theatrical stage, each stage of evolution allows for actors to play upon it.

This Seven Stages outline is informed by many authors and from extensive research in biology showing the power, ubiquity and importance of cooperation, symbiosis and mobile DNA in evolution. Click on each title at right to learn more about each ongoing stage of evolution. 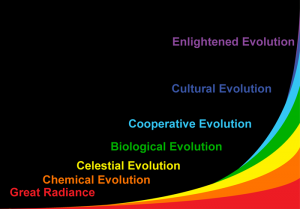 “If you study an old-fashioned television screen up close, you’ll see dots of different colors dancing in front of your eyes. You’ll think you are looking at chaos. But stand back, and you will see a picture full of meaning. Something like this happens over and over again as we study the past. Stand too close to the details and it’s hard to see anything but the idiosyncratic actions of individual human beings. Big history helps us stand back from the details and see the patterns. By doing so, it can transform our ideas of what history is about.” ~ David Christian

About 13.7 billion years ago, a Great Radiance (aka the Big Bang) lit up our universe.  Within the first moments,  space-time, gravity, light and other forms of electromagnetic radiation emerged. Shortly thereafter, the first subatomic particles formed.

Within the first few minutes after the Great Radiance, protons and neutrons, the building blocks for all chemicals,  had formed.  Around 380,000  years after the Great Radiance,  the universe cooled enough to allow the first elements to form.  This cooling allowed electrons to combine with nuclei of protons and neurtrons to form the first hydrogen and helium atoms.  As the electrons were captured by the nuclei, light was released.  Today, we can see evidence of this light as “cosmic background radiation.”   Hydrogen and helium later fused into heavier elements inside of exploding supernova stars.   Over time, these chemicals set the stage for the emergence of galaxies, stars, planets and other celestial bodies. Elements also merged with other elements to from more and more complex chemicals, some of which became precursors for life.

Soon after the the first gaseous elements formed, these gases began swirling into clumps of matter that would eventually become stars and galaxies.  Around a hundred million years after the Great Radiance, stars began to shine. Eventually galaxies formed. Planets and moons formed.  Our sun and Earth emerged over four and a half  billion years ago, followed soon thereafter by the moon.

Around 3.7 billion years ago, life began on Earth. How the first organisms emerged on Earth is still a great mystery.  These first organisms were simple-celled organisms lacking a nucleus.  These bacteria-like creatures eventually evolved more and more complex biochemical pathways and genetic storage and retrieval systems. Some organisms evolved the ability to speed up evolution through the emergence of mechanisms to mobilize DNA. Mobile DNA allows the duplication of modification of genes. Mobile DNA allows organisms to evolve more quickly into creatures of  greater biochemical and morphological diversity.

Over time, simple life forms cooperated with other simple celled organisms to become more organized, more complex and more able to inhabit new environments. Cooperation occurs at the subcellular, cellular,  organismal and societal levels. One type of cooperation is “endosymbiosis” which is a cooperative association of simpler cells giving rise to complex cells.  Endosymbiosis created cells with mitochondria and chloroplasts, which could use energy more efficiently in certain environments.  Eventually, these more complex cells cooperated to become multicellular organisms. Multi-celled creatures then evolved differentiated tissues which cooperated to create a more complex organism capable of new traits, such as seeing, running, swimming, and integrating information.  Cooperation is a way for organisms to use resources more efficiently and thus be more “fit”.  With cooperation, organisms can use less energy to produce more biomass.

With the emergence of the prefrontal cortex, humans gained the power of language and the power to imagine the future before it happens. This power of imagination leads to a new kind of creative evolution, in which scenarios are tested first in the imagination before people turn the ideal image into reality. “Imagination creates reality.”  Through imagination, collective learning is codified into written form, which in turn allows for even greater imagination. This in turn fascilitates the emergence of culture, religion, science, and “The Age of Reason.” Imagining the needs of others, a person may then help to satisfy these needs. People can imagine the benefits of exchanging goods and services, so trade proliferates. As trade proliferates, specialization increases. People become more and more interdependent and culture becomes a powerful force of evolution.

While some people fear humans are near the end of evolution, others are rationally optimistic that we are at the threshold of something new and magnificent.  As people can see where they came from, they gain a better understanding of where they may be going.  People now realize that light can become matter, that species go extinct, that the conscious mind is barely aware of the powerful subconscious, that love feeds our imagination, that imagination creates reality and that “we are all in this together.” These realizations create the possibility for a whole new era.   Called by some “The Age of Empathy,” this new era of Enlightened Evolution opens possibilities that humanity may eliminate needlesss suffering, that we will find new ways to protect the biosphere and that sentient life will flourish throughout the cosmos.