Colors of the Universe 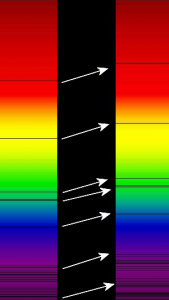 These questions can be answered by looking at rainbows.

Looking at light can tell us about our evolving universe: what stars and galaxies are made of, how far away they are, and how fast they are moving. When we look at rainbows of light, we are looking at white light split into its component colors, or spectrum. The study of light spectra is called spectroscopy. In this activity, we use diffraction glasses to observe how light is split into a rainbow of colors.

A powerful tool for learning about the evolution of our universe is observing the the rainbows of light given off by stars and galaxies. The rainbow pattern formed by light of different sources is called a spectrum. Spectroscopy uses light to study elements.   Since stars and galaxies give off light, much can be learned about them through the study of spectroscopy.

Spectroscopy tells us what stars and galaxies are made of.

Looking at the rainbows of light that stars and galaxies give off, scientists learn what the stars are made of and how far away they are.

Since different kinds of materials have slightly different spectra, scientists can use a star’s spectrum to figure out what it is made of.

Spectroscopy tells us about the position and movement of stars and galaxies.

Spectroscopy can also be used to tell us about the distance and movement of stars and galaxies. By observing the spectra of galaxies, scientists have discovered that some are moving away from us.  This is the Doppler effect.

By observing redshifts, scientists are able to show that the universe is expanding.  An expanding universe was the first clue that the universe had a beginning.    This redshift is the basis of Hubble’s Law, which states that the degree of redshift in light is proportional to its distance from us. That is, the more red-shifted a galaxy is, the farther away it is.

Get diffraction grating glasses or slides. Available from Amazon.

CAUTION! Do not look at any source of light that you would not look at without the glasses (i.e. sun). 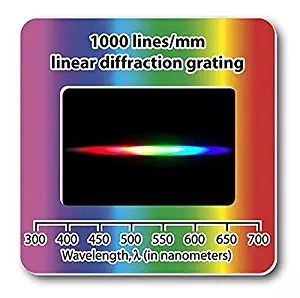 Although we can see the spectrum of lights using diffraction glasses, we will not be able to see the redshift of galaxies using these glasses. To see the Red Shift of distant stars, scientists use more sensitive instruments to examine light spectra. Different elements absorb light in different frequencies, which causes dark bands to appear in the spectra. To the left is a picture with the spectra from various light sources.