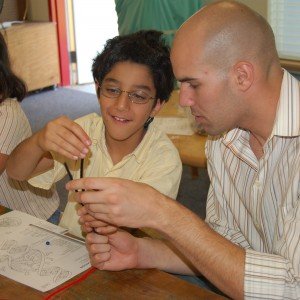 Simulate DNA with Beads on Pipecleaners


“At the heart of evolution – at least on this planet –
is a string-shaped molecule called deoxyribonucleic acid.”
~ Carl Zimmer in The Virus and the Whale

Hands on Activity by Cathy Russell.

Summary: Students “synthesize” a model of DNA using colorful beads and pipe cleaners.  They will then “transcribe” this DNA into messenger RNA and then “translate” this into a protein.

Time: Best in two  or three class periods, depending on the age of student 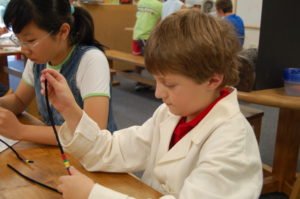 DNA is the information storage molecule of life.  Comparing DNA sequences shows the relatedness of all living creatures.  Evolution works through the modification of DNA, so to properly understand biological evolution, it is helpful to understand the basic structure of DNA. In this activity we will make a model of a gene. In this case, it will be the gene encoding oxytocin, a small polypeptide that works as a hormone in mammals (see background below).  We use this sequence because it is small and relevant in people’s lives.

This activity uses beads and pipe cleaners, which are inexpensive, readily available and easy to assemble.

If you can get them, Pop Beads in the various colors are ideal for creating models of DNA.  However, they are more expensive and not as readily available.

Notes to Instructor:  This is a simplified demonstration of DNA replication, transcription and translation. The hundreds of enzymes, molecules, and other details of DNA replication, transcription and translation can overwhelm a student with detail that can divert their attention from the main function of DNA, which is information storage. This activity focuses on DNA structure.  with emphasis placed on the flow of information from DNA to RNA to protein and how this relates to evolution.

Even though the models presented are simplified, it would be helpful for the teacher to have a deeper understanding of the process to answer student’s inevitable questions. A clear and thorough explanation of DNA is in the text book, Biology, by Neil Campbell, Jane B. Reese, and Lawrence G. Mitchell.  This outstanding college biology textbook is permeated with great information on DNA and evolution.

First, make a strand of DNA.  Put red, yellow, blue and green beads on a black pipe cleaner corresponding to the DNA sequence below:

Each bead color corresponds to a different nucleotide as follows:

When new cells are made, DNA is replicated and a copy is given to each new cell.  In this activity, imagine that you are DNA polymerase, the enzyme that makes DNA using a DNA template.

Now imagine that the double stranded DNA helix was already unwound, and you are working with only one strand of the DNA,  Put beads on another pipe cleaner that complement, or create base pairs, with the sequence of beads on the first pipe cleaner.  Wherever there is a cytocine (red bead), compliment it with a guanine (yellow bead.)  And where there is am adenine (blue bead,) compliment it with a thymine (green bead.)

Discuss the limitations of this model with your students.

Encourage students to imagine that they are RNA polymerase, an enzyme that uses a DNA template to make messenger RNA.

Unwind the double strand of DNA that you made.

Take a red pipe cleaner and line it up with the black DNA.

Now add beads to the pipe cleaner that complement the beads on the DNA. This process is much the same as synthesizing DNA, except instead of a thymine, a uracil is used instead to complement adenosine. Use the code as follows.

Note that only one strand is the “sense” strand.  The RNA polymerase would recognize this strand because it is the one with the promotor, a sequence of DNA recognized by the RNA polymerase.  (which, for simplicity, we have not included.)

Translation is the process of converting information from the mRNA into protein.  Take the red beaded mRNA strand and imagine that it goes to a ribosome, a cellular “machine” that uses the mRNA template to create a protein.

In translation, the ribosome reads 3 nucleotides as a “codon” that corresponds to an amino acid.  To simulate the creation of a polypeptide, put one bead on a blue pipecleaner.   In this example, the

In this simplified activitiy, we have not used a start codon (AUG) that the ribosome recognizes to begin translation.

DNA is shared by all organisms. Although details vary, all organisms replicate their DNA, transcribe it into RNA and translate mRNA into proteins.

Can you think of examples of point mutations affects people?

Oxytocin is sometimes called the “love hormone”  because it induces feelings of connection and well-being in people. Found in mammals, this hormone is involved in bonding and trust between people.

Biology by Neil Campbell, Jane B. Reese, and Lawrence G. Mitchell. This outstanding biology textbook for college students is permeated with great information on DNA and evolution.

Genetic Origins:” The Study of human evolution begins with your DNA. http://www.geneticorigins.org/geneticorigins/

This  site provides biochemical methods and computer tools to allow students  to use their own DNA “fingerprints” as a starting point in the study  of human evolution. Two experiments are currently available, which  are supported  by reagents and ready-to-use kits available from Carolina Biological  Supply Company.

National Genographic – “we are all related—descended from a common African ancestor who lived only 60,000 years ago.” https://www3.nationalgeographic.com/genographic/
National Standards Addressed (NRC):

THE MOLECULAR BASIS OF HEREDITY