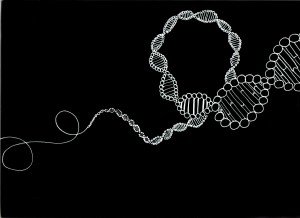 DNA is the language of life.   To understand how life evolves, we must understand DNA.

Deoxyribonucleic acid is in many ways similar to a language.  Instead of 26 letters, DNA contains just four letters: A, T, C and G, which are combined in unique ways to three letter words, called codons.  In turn, these codons (words) can be put together to create sentences (genes).

How Does DNA Evolve?

One of the greatest challenges to understanding evolution is in understanding how genetic variety emerged. When Darwin wrote “on the Origin of Species” he knew that variation was essential for evolution, but he did not know about DNA nor how DNA could change in ways that could help organisms adapt.  Changes in DNA are known as mutations. The first mutations were discovered to be errors in single nucleotides causes by radiation or chemical damage. For years, scientists beleived that this was how genetic novelty was created, by errors and damage to the DNA.

Then, in 1950, Barbara McClintock discovered “jumping genes,” also known as “transposons”. Transposons are whole lengths of DNA that can move around the genome.

In 1971, S. Ohno published “Evolution by Gene Duplication.”    Ohno demonstrated that useful genetic variety is created by the duplication and modification.

For many people, it seemed intuitively improbable that the diversity of life could evolve from random mutations due to errors and damage. As it turns out, this intuition is correct. While point mutations are essential, they are not nearly sufficient to explain how genomes evolve.

In recent years, we have learned that the  mobile DNA plays a huge part in creating this genetic variety. Thanks to data from the sequencing entrie genomes, scientists have discovered that most of the genomes of eukaryotic organisms comes from “Mobile DNA” aka “jumping genes.

Duplications, gene transfer and rearrangements of long stretches of DNA are what create big changes in the genome and in the organism.   When entire genomes move in with other genomes, as happens in endosymbiosis and hybridization, evolution progresses in huge leaps.  This “mobile DNA”  or “jumping genes” creates the genetic diversity that allows for the evolution of organisms as diverse as giraffes, humans and manta rays. The Nobel-prize winning French biologist François Jacob called this process of duplication, moving, and subsequent modification “evolution by molecular tinkering.”