Just as organisms evolve, so too, do societies and iPhones evolve.  But what about the theory of evolution?

Has  Darwin’s theory of evolution evolved?

Evolution happens. We have mountains of fossils and terabytes of genomic data to prove that life evolves.

Yet what exactly happened?  Which ancient creature was the ancestor of which current species?  How do new traits appear?   To answer these questions, scientists propose  different theories to describe details about how evolution occurs.

Many people assume that the theory put forth by Darwin in Origin of Species is the final say on evolutionary theory. Biologists, however, know that the theory of evolution has evolved over time.  For example,  evolutionary theory dramatically changed when Darwin’s original ideas were merged with ideas from genetics to become the Modern Synthesis.  Evolution textbook author, Douglas Futuyma, presents a wonderful slideshow available on Youtube demonstrating the emergence of the Modern Synthesis.

Yet what most people don’t realize is the theory of evolution has progressed way beyond the Modern Synthesis.  Failure to recognize this new unfolding theory and the many recent discoveries in support of it has caused a great deal of confusion among students and non-scientists.  This confusion partly explains why so many Americans doubt that evolution happens (Newport, 2012).

The following table offers a brief overview of how our understanding of evolution has  changed over time. This table presents three major versions of Darwin’s original theory: 1) Darwin’s theory 2) the Modern Synthesis and 3) the Integral Model of evolution. 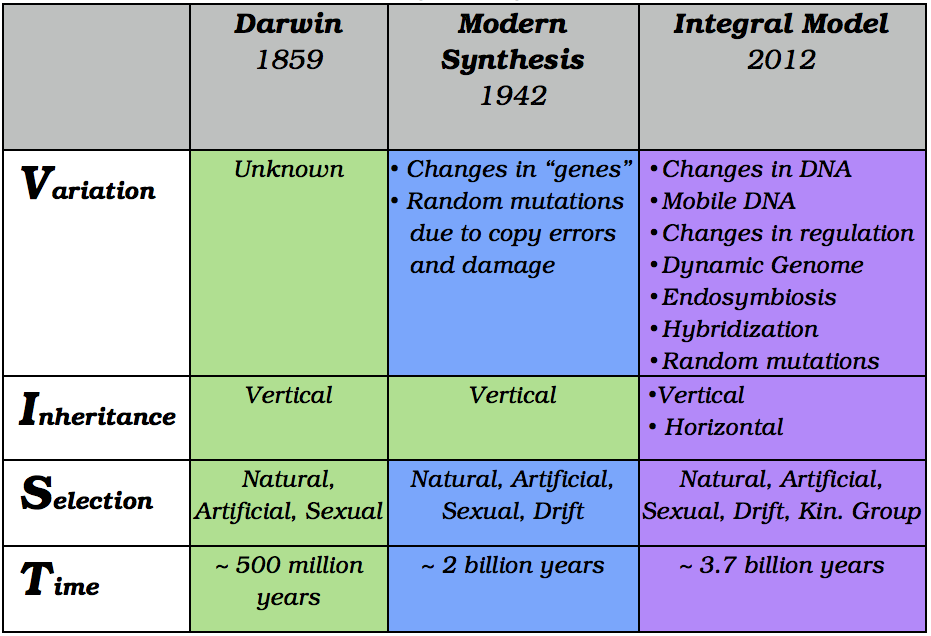 To make sense of the confusion surrounding the theory of evolution, it helps to know that the theory of evolution is itself evolving. The table above shows three different models of evolutionary theory.  The first is Darwin’s model as described in Origin of Species.  The second model (featured in most textbooks and popular web sites) is the Modern Synthesis, a model that combined mid 20th century genetics with Darwinian theory.  The most recent model I call the “Integral Model.” I discuss these three theories in more detail below. 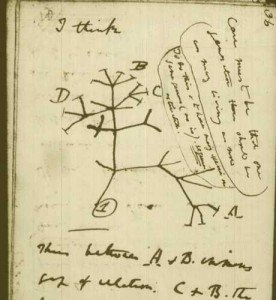 Darwin’s theory was captured by his sketch of a Tree of Life.

Since before Darwin’s time, people have wondered how life diversified into such a vast array of forms.     Most people think Darwin’s greatest contribution was “Natural Selection.”  While Natural Selection (co-discovered by Wallace)  was indeed an important contribution, Darwin’s greatest and most enduring accomplishment was to create a powerful  framework for understanding how species change over time.  Darwin suggested that descent with modification (what we today call evolution) involves several “laws.”  These include the law of variation, the law of inheritance, and the law of selection (what scientists today call “differential reproductive success”). Darwin also acknowledged that long periods of time were required.  The acronym VIST describes these necessary ingredients (Variation, Inheritance, Selection and Time).  Over the years, many details of evolutionary theory have changed, but Darwin’s basic structure for how evolution works remains the same.

Darwin acknowledged that variation, inheritance, selection and time are important for evolution.  Yet because Darwin didn’t know about DNA, genomes or genetics, he knew nothing about how variation occurred and he knew nothing about horizontal gene trasnfer.  Instead, he focused his attention on what he could observe, which was natural selection.  In his famous book On the Origin of Species, Darwin not only outlined the general laws of how species change over time, he also detailed the principles of natural selection.

Before delving into the details of evolutionary theory, it is essential to define our terms. The phrase “Natural Selection” often causes confusion because it has two distinct meanings.  1) For some people, including Darwin, Natural Selection is one element of evolution (the other elements being Variation, Inheritance and Time.)  Today, many scientists use the term “differential reproductive success” as a more accurate description that includes natural selection and excludes the processes of variation. 2) For other people, “Natural Selection” is synonymous with the entire theory of evolution and all the processes associated with it, including Variation, Inheritance, Selection, and Time.  Because the latter definition includes a reference to itself (natural selection), this circularity tends to confuse.  Also, since scientists (including Darwin) have shown that evolution can happen by means other than natural selection, (for example via random drift, via endosymbiosis or via hybridization)  it is confusing to equate evolution with natural selection.    Therefore, when I refer to natural selection, I mean the process that describes “differential reproductive success” and not the whole theory of evolution. 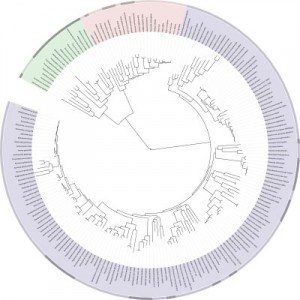 This tree of life represents the Modern Synthesis. It does not show horizontal gene transfer.

While Darwin offered a reasonable explanation for how natural selection works,  he had little insight into another essential aspect of evolution, which is variation.  In the early 20th century, biologists were beginning to understand how variation occurs.  Geneticists clearly saw how heritable material contributed to evolution.  In 1942, Julian Huxley wrote a book entitled Evolution, The Modern Synthesis.  This book summarized and gave a name to the work of hundreds of researchers who had been elucidating the mechanisms of variation.  The Modern Synthesis united the Laws of Selection with the Laws of Variation as they were known at the time.

Mutation of a word

The term “mutation” originally simply meant “change.” Over time, however, the meaning of “mutation” began to mutate.  Instead of simply meaning “change,” the word mutation began to take on the meaning of deleterious change or change due to error or damage.   For science geeks, mutation often evokes images of flies with legs sprouting from their heads.  In the popular imagination, mutation evokes images of Godzilla, a mythical monster created by radiation from nuclear bombs. (Godzilla was created by Japanese artists after the bombing of Hiroshima and Nagasaki.) According to the Collins Thesaurus of the English Language, the term “mutant” is synonymous with freak, monster, mutation, deviant, oddity, monstrosity, freak of nature.  So, the word mutant mutated from “change” to “deviant or monster.”

By coincidence, the mechanisms of variation were discovered in the “Nuclear Age.” This was the age in the 1940s when nuclear weapons and nuclear power were being explored.  Just a nuclear power was being explored, scientists exposed flies, molds, bacteria and other organisms to radiation.

Scientists observed that genetic changes happen as a result of exposure to radiation.  (Beadle and Tatum, 1941; Muller, 1946.) Later, the growing field of synthetic chemistry led scientists to discover that many chemicals damaged the structure of DNA, and hence introduce variation.  Damage from radiation and from certain chemicals produced random changes in the DNA.  These changes were called “mutations.”

Since the Modern Synthesis, people have assumed that variations result from random accidents due to damage or replication errors.   In classes and textbooks on evolution, professors show slides of nuclear bombs and chemical factories to illustrate the causes of variation.  For years, people assumed that these random errors and damage were responsible for the useful variation that gives rise to the tremendous diversity of life.  While biologists were learning the source of useful variation, this was not apparent to many non-scientists.

Many non-scientists are perplexed as to how errors and damage could cause the tremendous variety of life on Earth. A whole industry called “Intelligent Design” has spring up  declaring that errors and damage alone could not explain evolution, and therefore, an “Intelligent Designer” was needed to explain the useful variations.   By not understanding where  useful variations come from,  some non-scientists assumed that evolution could not explain how life came to be.  Paradoxically, just as scientists were gaining a clearer picture of how evolution happens, the public had another (false) reason to doubt evolution.

As more genetic  data became available, the  Modern Synthesis theory of evolution lost it’s explanatory ability because it relied on “errors and DNA damage” to explain genetic variation.     As a result of not understanding how variation occurs, a large number of Americans still doubts that evolution explains human origins, according to 2012 Gallup Poll (Newport, 2012.)

Today, scientists know of mechanisms in addition to damage and random errors that contribute to useful variations.  Thanks to huge breakthroughs in genetics and genomics, we now know that the essential mechanisms for creating variation are not due to solely to random errors or damage.  Instead, molecular and cell biology have given us a much more interesting view of how variation is created.  And while the process may seem intelligent, we can see that all these processes are natural. 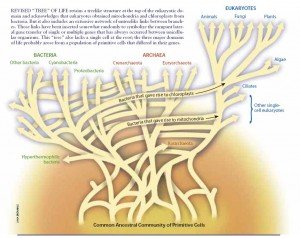 Ford Doolittle’s Web of Life replaces the Tree of Life by showing horizontal gene transfer.  This image illustrates the importance of genetic recombination as foundational for the Integral Model of Evolution.

Since the Modern Synthesis, scientists have made huge discoveries about DNA, the molecule of evolution.  Watson and Crick discovered the double helix structure of DNA.  Barbara McClintock  discovered  “jumping genes” aka transposons and mobile DNA.  Lynn Margulis discovered the role of symbiosis in cell evolution. Many others discovered the role of  horizontal gene transfer,  gene duplication, and chromosome rearrangements in evolution.   Sequenced genomes have shown that over 50 percent of most genomes have mobile genetic elements.  The field of Evo-Devo (evolutionary and developmental biology) has emerged showing how genetic recombination can have huge evolutionary changes. These new discoveries have changed the theory of evolution yet again.  We now know where useful genetic variation comes from: from recombination.

We also know that over billions of years, cells have evolved the genetic machinery to facilitate this recombination.  Various enzymes (molecular machines) have evolved to move DNA.   These enzymes (recombinases, ligases, transposases to name  just a few)   conferred huge fitness advantages, allowing organisms to recombine their genomes to more quickly adapt to changing environments.  Sex, the recombination of DNA, is another example of the genetic machinery that has emerged to enhance genetic variation.

I call this updated theory the “Integral Model” of biological evolution because it integrates Darwin’s ideas with the Modern Synthesis with major breakthroughs in biology over the past 50 years.

This updated, integral model of evolution solves Darwin’s Dilemma without the need for an Intelligent Designer.

Muller, Herman Joseph, (1946) “For the discovery of the production of mutations by means of X-ray irradiation.” http://www.nobelprize.org/nobel_prizes/medicine/laureates/1946/muller.html?print=1