History of this site 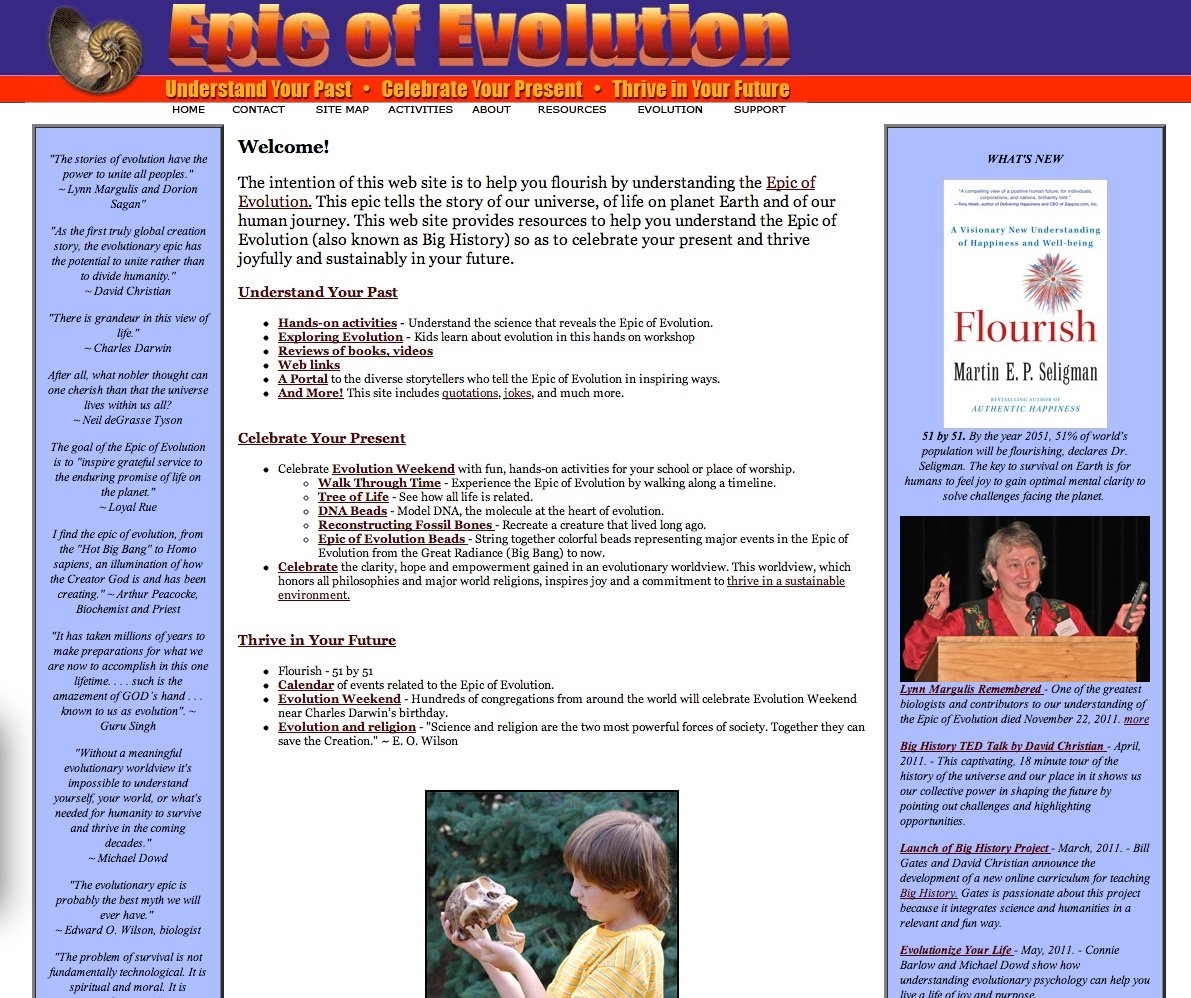 Just as life and the universe change over time, so too has this site changed over time.  Here is a brief history of this Epic of Evolution site. 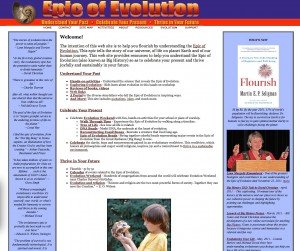 Then, I created the curriculum for and taught a class called “Exploring Evolution.”  This was a five day class for elementary to middle school kids through the University of Colorado’s Science Discovery program.  I packed a half year’s worth of hands on activities into five half day classes.  The kids loved this class, and I had a blast teaching it. Science Discovery was wonderful in that it attracted kids who were really excited to learn about evolution.  I really loved some of the activities that I developed for that class and wanted to share them with the world, so I posted them on this site.

In 2006, I participated in the first ever Evolution Sunday, a grassroots event designed to foster dialog between churches and scientists about evolution. I decided to make the Epic of Evolution accessible to religious people who were eager to learn about science. At about this time, I realized the importance of language, and how it is symbols that we use to point at things, but not the things themselves.  I also realized that most religious people who heard the Epic of Evolution in friendly way were open to learning more.  Unlike what the popular media seems to suggest, most people in churches were ready to learn more about our science-based creation story.

In the spring of 2011, I saw David Christian’s TED talk on teaching Big History.  His project to teach Big History in high schools ignited my enthusiasm to an even greater degree. That night I threw an impromptu party with close friends because I was so excited that the field I wanted to teach in had finally been created.  I became a charter member of the International Big History Association and attended the first meeting the summer of 2012.

Over the years, the old site, which began using early HTML and a kluged-together style sheet, was becoming ponderous and time consumting to update.  Also, I really wanted to communicate with people, and without blogging capabilities, this was a challenge of the old site.

2012 is an auspicious year to begin something a new web site.   The old way is falling apart, which opens the way for the new.

And with the new site, I’ve been thinking about what I really want to communicate.

My intentions with this site have changed over time.  Over time, I have gained clarity about this site and my life work.

My goal is to teach the Epic of Evolution in ways that inspire people to celebrate the present and thrive in the future.

One of the goals of the new site is to remind people to envision an awesome future.

In the past few years, I have also become clear about how our thoughts create our future.  For example, if you think about eating a lemon, your mouth will water in anticipation of the acidity.  If we think fearful thoughts, our body becomes flooded with cortisol and we contract. Although some of the purveyors of this idea go overboard with this idea, there is truth in it.   Every worthy human creation begins as a worthy idea.

For me, when I contemplate the Epic of Evolution, I am filled with a profound sense of grace.  I feel that I belong.  I don’t know why the universe is here, but I do know that billions of my cells coordinate so that I may dance, that trillions of plants provide oxygen so that I may breathe, and that countless events have to happen in every instant so that we all may live.  There is a power, some call it Nature, others call it God.  At the moment, I like to call it Light, a metaphor for the still mysterious patterns and energies that create this universe. And from this sense of grace is a sense of overflow, a desire to share this good news and to help pay forward the blessings that I have received.