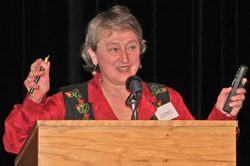 “The stories of evolution have the power to unite all peoples.” ~ Lynn Margulis and Dorion Sagan

One of the greatest biologists and contributors to our understanding of the Epic of Evolution died November 22, 2011.

I first met Lynn when I was a student at Boston University.  I had the great fortune of taking her class on evolution. Lynn inspired me for her ability to think expansively and to encourage her students to do the same.  She was an inspiring teacher, and a courageous communicator who radically advanced our understanding of the Epic of Evolution.  She was also a very loving person who was wonderfully kind to me and those close to her.

I greatly admire Lynn Margulis’s sheer courage and stamina in sticking by the endosymbiosis theory, and carrying it through from being an unorthodoxy to an orthodoxy. I’m referring to the theory that the eukaryotic cell is a symbiotic union of primitive prokaryotic cells. This is one of the great achievements of twentieth-century evolutionary biology, andI greatly admire her for it. ~ Richard Dawkins 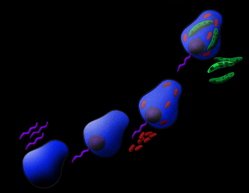 Lynn’s perspective on life was huge. Not only did she think outside the box, she thought outside of biology, outside of science and outside of convention. Not only was she one of the greatest biologists of the 20th century, offering one of the most important evolutionary ideas of all time (symbiogenesis in cell evolution), she was one of our most profound and comprehensive thinkers who invited us to see the Earth as an organism and suggested that we see evolution as more than competition.

In addition to having a great mind, she had a huge heart. This combination made her an inspiring teacher. She taught with passion, curiousity, humility, compassion. She treated her students like family and insisted that family come first. While Lynn’s student at Boston University, I gained a much deeper understanding of the Epic of Evolution. Because of Lynn’s Five Kingdoms (later Six Kingdoms), every biology textbook now provides a better understanding of evolution and how people are related to all other life.

Lynn was also one of the most courageous people I have ever met. Even when peers attacked her for radical insights, she continued to champion ideas that ran against the grain of popular thought.

This is the issue I have with neo-Darwinists: They teach that what is generating novelty is the accumulation of random mutations in DNA, in a direction set by natural selection. If you want bigger eggs, you keep selecting the hens that are laying the biggest eggs, and you get bigger and bigger eggs. But you also get hens with defective feathers and wobbly legs. Natural selection eliminates and maybe maintains, but it doesn’t create. ~ Lynn Margulis
Most recently, Lynn was skewered because she didn’t agree with the idea that point mutations create genetic variation responsible for major leaps forward in evolution. Because of the complexity of molecular biology and mobile genetic elements (transposons, retrotransposons, plasmids, SINEs, LINEs, crossover and recombination during meiosis, etc,) it is challenging for people to understand what she was talking about. These mobile genetic elements are responsible for horizontal gene transfer, which is the primary mechanism for creating genetic variation, NOT point mutations. Because she disagreed that point mutations cause evolution, some claim that Margulis was against evolution. This is absurd. What she was against was teaching evolution from a 19th century perspective that ignores the origin of genetic variation. Darwin didn’t know about the origins of genetic variation, because he didn’t know about genes or DNA. To teach Darwinian natural selection while ignoring the origin of genetic variation is ludicrous. It’s like saying human culture evolved because of war, while ignoring the role of communication in its various forms: literature, art, music, education. Darwin himself would have scoffed at anyone who insisted that natural selection provides a full explanation of biological evolution.Like Steve Jobs who died last month, Margulis was passionate about her work and believed that truth would set us free. Like Jobs, she was so passionate about sharing great ideas with the world that she didn’t have the time to sugarcoat some of her ideas, which made her (like Jobs) feel abrasive to some. As with Jobs, the world is a much better place because she lived and loved and shared her passion with us all.
by Cathy McGowan Russell, Thanksgiving, 11/24/2011.

Evolution is no linear family tree, but change in the single multidimensional being that has grown to cover the entire surface of Earth. ~ Lynn Margulis
Life is matter that chooses. ~ Lynn Margulis