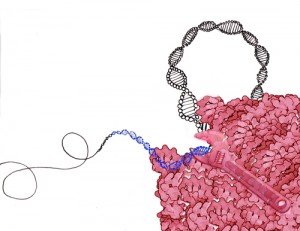 Cells have evolved “tools” (like the red enzyme above ) to move DNA around. These tools slice novel DNA (in blue) into  host DNA (black double helix.).

Shapiro and colleagues call this The Third Way of Evolution. Their stated goal is “to present a wide variety of novel views about evolution but does not necessarily endorse any of them. Our goal is simply to make new thinking about evolution available in one place on the web.”

According to Shapiro, “NGE is shorthand to summarize all the biochemical mechanisms cells have to cut, splice, copy, polymerize and otherwise manipulate the structure of internal DNA molecules, transport DNA from one cell to another, or acquire DNA from the environment.”  In addition, cells have mechanisms to create totally novel sequences by polymerizing DNA without at template.  They also have the ability to take RNA molecules and reverse transcribe them into DNA.

Like photosynthesis, multicellularity and others aspects of life, the mechanisms for Natural Genetic Engineering have evolved over time.  It’s kind of like the evolution of evolvability. NGE does not replace random mutations and selection. NGE adds to this. For around 2 billion years of life on Earth, life was single celled.  Then, the rate of diversification sped up.  Evolution was able to happen at a faster rate, due to the emergence of more efficient mechanism of Natural Genetic Engineering.  Creatures moved out of water to inhabit every niche of planet Earth. There was an explosion of complex, multicellular, and multi-tissued life forms.

“There is now ample evidence that gene duplication is the most important mechanism for generating new genes and new biochemical processes that have facilitated the evolution of complex organisms from primitive ones.” ~ W. H. Li in Molecular Evolution, 1997

While Shapiro coined the term “Natural Genetic Engineering,” the mechanisms of NGE have been known for years.   In fact, genetic engineers who create genetically modified organisms have borrowed the tools that cells use for their own natural genetic engineering.

So many cell mechanisms have evolved to fascilitate “Natural Genetic Engineering,”  that there is not space here to begin discussing them all.  Visit Dr. Shapiro’s web site to see the collection of list of many of these mechanisms.  In cells, many of these tools for natural genetic engineering are “enzymes.”  These enzymes are like tiny molecular tools that can cut, copy and paste DNA.  (The the suffix “-ase is used to indicate that a molecule is an enzyme.) These tools of genetic engineering includes such things as “transposases,” “recombinases,” “ligases,” “integrases,” and “reverse transcriptases.”

Other tools of natural genetic engineering include: recombinases. ligases, helicases, telemerases, reverse trasnscriptases, methylases.  The whole complex system of sex evolved as a way to recombine DNA.  Recombinases recombine sections of DNA.  Ligases are enzymes that connect two pieces of DNA.  Reverse transcriptase is an enzyme that copies an RNA molecule into DNA.

Where did systems of Natural Genetic Engineering come from?  They evolved.  Because DNA repair mechanisms are ubiquitous and necessary for replication, DNA repair mechanisms may have been the precursors to NGE (Shapiro, 2011).    This is how NGE is both the product of evolution and the cause of the evolution of the profound diversity of life we see on earth today. Without NGE, life would exist, but it would be limited to simple cells, probably lacking nuclei and lacking the ability to thrive in diverse environments. 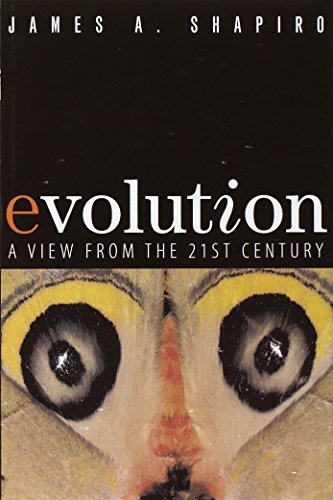