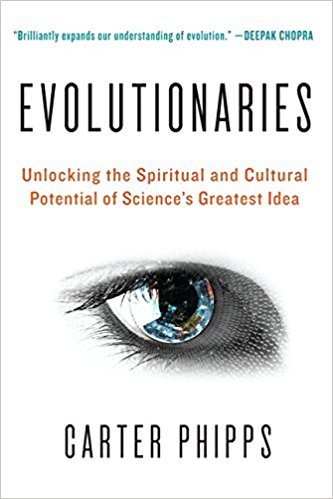 “We’ve all heard about fossils and fruit flies, Darwin and Dawkins. But what if our current scientific understanding of evolution was just the tip of the iceberg? What if there’s a way to see evolution that could transform not just your understanding of the physical world, but also your most fundamental sense of self-identity? That could give you a rational, intellectually informed sense of optimism for the future? That could even provide a new source of spiritual insight and inspiration?“

Carter Phipps, offers insightful answers to these questions in his book, EVOLUTIONARIES: Unlocking the Spiritual and Cultural Potential of Science’s Greatest Idea, Phipps is an author, consultant, and speaker. He co-founded the Institute for Cultural Evolution, a non-profit social policy institute, whose mission is to bring new insights into the evolution of culture to the arena of politics and social policy.

As executive editor of What Is Enlightenment? magazine from 2005-2010, he interviewed thought leaders across the intellectual landscape. He wove together the greatest ideas into this insightful and optimistic book.

While many people find “evolution” and “optimism” to be at odds, Carter Phipps links these two ideas in his book, Evolutionaries.  Evolutionaries are optimists who are informed and inspired by the evidence supporting an evolutionary worldview. This book’s succinct, wise and delightful prose inspires me so much that I am reading it for the third time.

WHAT IS AN EVOLUTIONARY?

Evolutionaries are: 1) Cross disciplinary generalists, 2) Capable of comprehending vast time and are 3) Optimistic.

“How we think about evolution is foundational to the kinds of vision that we hold for our collective future.”  ~ Carter Phipps

According to Phipps, an evolutionary is a person with a science-friendly worldview who places questions of purpose and meaning within the context of an evolving cosmos.  Evolutionaries are united ” by a a broadly shared evolutionary vision and a care for our collective future.”   With their broad view of deep time, Evolutionaries are optimistic.  This deep time perspective gives people a rationally optimistic view of the future as well as a strong desire to manifest that vision.

Years as editor at Enlightennext magazine sharpened Phipp’s  ability to write clearly  and entertainingly.   “We must journey to the frothy frontiers of culture, to the border between  controversy and convention where the next great cultural breakthroughs are struggling to be born. ” p. 4.

“Evolution is a fact.”  Carter opens the first chapter with this bold, unambiguous statement, which reassures the reader that he is not trying to sneak in Intelligent Design or pseudoscience.   While Phipps acknowledges that his  book is not so much about the science of evolution as it is about the social and spiritual implications of this science, his book reasonably reflects most standard textbook representations of the science of evolution.  Many books on the spirituality of evolution tend to misrepresent the science.  Carter goes beyond the standard textbook view in accurately describing how the science of evolution  is in flux as new information, such as horizontal gene transfer, endosymbiosis becomes available. His book would be even more up to date if he acknowledged the role of gene duplication and hybridization in evolution. The book would be stronger if it mentioned more of the data from genomics that elucidates the mechanisms of evolution.   In addition to acknowledging the work of Margulis, it is essential to mention the work of Carl Woese (who gave us the Three Domain view); Barbara McClintock (who showed the role of Jumping Genes) and  Ford Dolittle, who highlighted the role of horizontal gene transfer in evolution.

“Evolution as a new way of making meaning out of life in the twenty-first century.” ~ CP

“Ideas live less in the minds of individuals than in the interactions of communities.” ~ Fred Turner.

“We are witnessing the birth of an authentic new spiritual and philosophical worldview.” ~ CP

“Innovation and creativity is as much a function of the right kind of relationships as it is of a particular kind of individual vision. ” ~ CP

“Paradoxically, the debate about our origins is also a cultural referendum about our future.” ~ CP

“We are evolution become conscious of itself.”  ~ Julian Huxley at centennial of Origin of Species.

“The evolutionary vision is enabling us to discern, however incompletely, the lineaments of the new religion that . . . will arise to serve the needs of the coming era.” Julian Huxley. p3.

“Nothing in human culture makes sense except in the light of evolution.”

“We are still in the Wild West phase of development [of an established and fixed view of evolution], between the earliest pioneers exploring virgin land and homesteaders looking to settle down and build a new life on secured territory.”

Evolution, as an idea, transcends biology.  It is better thought of as a broad set of principles and patterns that generate novelty, change and development over time. p 16

Explosion of possibility followed by winnowing to the more enduring.

“Diversity is a great way in which the universe explores its future. ” ~ Brian Swimme

Our worldview is constructed.   We don’t have them.  They have us.    Touchstone proposition.

“WE ARE MOVING.”  This is the touchstone proposition of Evolutionary worldview.   We are becoming.   We are not just being.

Cathy adds that “Life is not just being or becoming.  It is Interbecoming.”

The spell of solidity is breaking.

OPTIMISM:  “No longer the victims of unchangeable circumstances, trapped in a pre-given universe, we find ourselves released into a vast, open ended process — on that is malleable, hangeable, …. and in small but not insignificant ways, responsive to our choices and actions.

“As the fog of fixity lifts, we are … just becoming cognizant of our own freedom — and immense responsibility.”

“So much info and so little context.”  Data rich and meaning poor.  Context gives meaning.

THE ADVANTAGE GOES TO THE COLLECTIVE THAT THRIVES,  NOT THE INDIVIDUAL WHO STRIVES.  ~ Elisabet Sahtouris.

“The spoils of evolution go not to the fastest or the smartest but to those who can find the best relationship between creative individuality and cooperative sociality.   p 52.

COORDINATE SELF INTEREST WITH THE INTEREST OF THE WHOLE .

Novelty is the Rosetta stone of evolution.