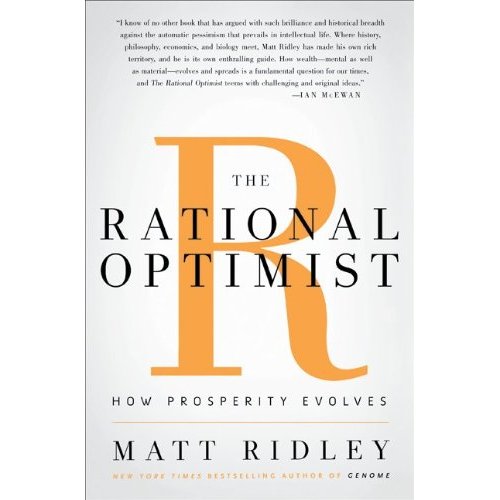 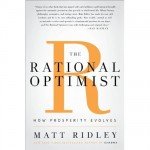 From the cover: “Life is getting better—and at an accelerating rate. Food availability, income, and life span are up; disease, child mortality, and violence are down — all across the globe. Though the world is far from perfect, necessities and luxuries alike are getting cheaper; population growth is slowing; Africa is following Asia out of poverty; the Internet, the mobile phone, and container shipping are enriching people’s lives as never before. The pessimists who dominate public discourse insist that we will soon reach a turning point and things will start to get worse. But they have been saying this for two hundred years.”

The Rational Optimist offers an alternative to the doom and gloom perspective that so often seems to dominate public discussion.  Matt Ridley is able to offer a more hopeful view, because he sees life from the deep time perspective of the Epic of Evolution.  If one looks at the short term, many aspect of life seem to be getting worse.  But if one steps back to see the grand sweep of history and evolution, as Ridley has done, one is filled with a rational optimism, especially with the realization that new ideas can quickly change society.  For example, at one time, the problem of horse dung in city streets threatened to drown civilization in horse waste.  Then, the horseless carriage was invented, saving city dwellers from pollution.

Now, CO2 emissions threatens civilization with global climate change.  Currently thousands of scientists and engineers around the globe are working to solve this problem.  And now, Germany is on the leading edge of creating an entire economy based on clean renewable energy.

When ideas have sex

Ridley understands biological evolution and applies these principles to cultural evolution.   “At some point in human history, ideas began to meet and mate, to have sex with each other.  Sex is what makes biological evolution cumulative, because it brings together the genes of different individuals.”  Without this sharing of genes through horizontal gene transfer or through sex “Each mutation would have remained isolated in its own lineage, unable to discover the joys of synergy.”

Here are some quotations:

“Evolution can happen without sex; but it is far, far slower.”

“Exchange is to cultural evolution as sex is to biological evolution.”

“This book dares the human race to embrace change, to be rationally optimistic and thereby strive fro the betterment of humankind and the world it inhabits. ”

From the book jacket:

“Matt Ridley does more than describe how things are getting better. He explains why. Prosperity comes from everybody working for everybody else. The habit of exchange and specialization—which started more than 100,000 years ago—has created a collective brain that sets human living standards on a rising trend. The mutual dependence, trust, and sharing that result are causes for hope, not despair.

“This bold book covers the entire sweep of human history, from the Stone Age to the Internet, from the stagnation of the Ming empire to the invention of the steam engine, from the population explosion to the likely consequences of climate change. It ends with a confident assertion that thanks to the ceaseless capacity of the human race for innovative change, and despite inevitable disasters along the way, the twenty-first century will see both human prosperity and natural biodiversity enhanced. Acute, refreshing, and revelatory, The Rational Optimist will change your way of thinking about the world for the better.”