Thank God for Evolution!: How the Marriage of Science and Religion Will Transform Your Life and Our World 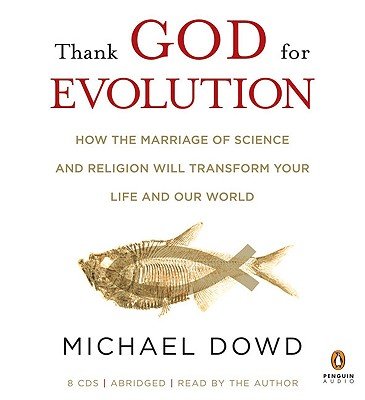 “Without a meaningful evolutionary worldview it’s impossible to understand yourself, your world, or what’s needed for humanity to survive and thrive in the coming decades,” according to Michael Dowd, author, minister and Evolutionary Evangelist. He and his wife, Connie Barlow, travel the country giving lively and inspiring presentations about the Epic of Evolution to churches, schools and community groups. His enthusiasm for sharing the science of evolution is infectious and easily accessible to all. Although Dowd typically addresses an audience typically neglected by authors of books on evolution – religious folks – his message is based on robust scientific evidence which makes his message particularly insightful and empowering for people of all philosophies. To see additional rave reviews for this book that has been endorsed by 5 Nobel Prize winners, and scores of scientific, religious and other cultural leaders, visit Amazon.com. Released June, 2008. Originally published November 2007. For more information, visit www.ThankGodForEvolution.com.