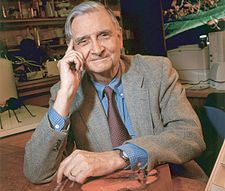 The phrase “Epic of Evolution” was probably first used by biologist E.O. Wilson to describe the whole story of the universe.  In his book,  On Human Nature, he wrote:
The evolutionary epic,is probably the best myth we will ever have.

Human beings must have an epic, a sublime account of how the world was created and how humanity became part of it … Religious epics satisfy another primal need. They confirm we are part of something greater than ourselves (…) The way to achieve our epic that unites human spirituality, instead of cleave it, it is to compose it from the best empirical knowledge that science and history can provide.

The true evolutionary epic retold as poetry, is as intrinsically ennobling as any religious epic.