Is there one “law” or explanation that helps us make sense of the Epic of Evolution?  Is there one principle that underlies physical, biological and cultural evolution?

According to Eric Chaisson,  professor of Cosmic Evolution at the Harvard-Smithsonian Center for Astrophysics, the answer is yes.

Chaisson seeks a unifying cosmic-evolutionary worldview that explains the origins and evolution of galaxies, stars, planets, life, and society.  As a teacher, his goal is to help people find a sense of place within the Epic of Evolution.

Over 14 billion years, systems have emerged with ever greater complexity.  This complexity can be measured by energy rate density.

For a wide spectrum of systems is plotted versus the number of billion years ago they first appeared. An increase across 14 billions years is observed, implying rising complexity throughout historical time.

Chaisson has also determined that complexity can be measured as an amount of energy flowing through mass for a given amount of time.  more complex an object is the more energy needed per gram per second to maintain this. As it turns out, human society seems to be one of the most complex things in the universe.

Cosmic evolution stipulates that complexity arises from simplicity, or, we could say, order from chaos. Observations demonstrate that an entire hierarchy of structures has emerged, in turn, during the history of the Universe: energy, particles, atoms, galaxies, stars, planets, life, and intelligence. Yet this increase in complexity with the steady march of time bothers some people. Why? Because cosmic evolution, at face value, seems to violate the 2nd law of thermodynamics. 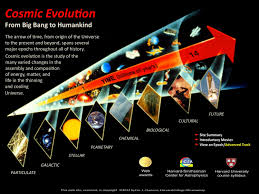 He explains how “the evident ‘constructiveness’ of cosmic evolution is thus reconciled with the inherent ‘destructiveness’ of modern thermodynamics.”      Find out more at his website on Cosmic Evolution.