Doctor, humanitarian, statistician, teacher, sword swallower. Because of his knowledge, compassion, humility, curiosity and desire to improve the world, Hans Rosling is a hero to millions of people around the world.  Although he passed away in 2017, his spirit lives on in his videos, in those he inspired and in his book, Factfulness, published in 2018.

Through his popular and entertaining  TED talks, Hans Rosling becamse an internet sensation. Best known as a statistician, Hans made facts come to life. He saw statistics not merely as numbers, but as people with their suffering and their hopes.  And he used the insight of statistics to help millions of people rise above childhood disease and poverty.  For Rosling, facts are healing.

“This is data as you have never known it: it is data as therapy. It is understanding as a source of mental peace. “ ~ Hans Rosling

Beyond being healing, facts allow us to see clearly.  We need to think clearly to make decisions that most effectively improve the lives of people.

“Factfulness, like a healthy diet and regular exercise, can and should become part of your daily life.   Start to practice it, and you will be able to replace your overdramatic worldview with a worldview based on facts.” ~Hans Rosling, Factfulness: Ten Reasons We’re Wrong About the World–and Why Things Are Better Than You Think

“We start the world”

Hans Rosling gained world wide fame with his entertaining TED talks that taught us about the world.

Like an enthusiastic announcer for a horse race, Hans Rosling would narrate animation of how the world has progressed over time. As bubbles, representing countries, moved across the screen toward better health and wealth, Hans’ voice would rise in enthusiasm, as if the underdog horse was crossing the finish line.

Rosling was a professor of global health at Sweden’s Karolinska Institute.  Together with his son and daughter in law, Rosling developed the software behind his dynamic visualizations and shared this through his nonprofit Gapminder.

Hans Rosling passed away in February 2017. His spirit continues to inspire the many people he touched with his passion, humor and commitment to making the world healthier, happier and better educated.

“This book [Factfulness] is my very last battle in my lifelong mission to fight devastating global ignorance. It is my last attempt to make an impact on the world: to change people’s ways of thinking, calm their irrational fears, and redirect their energies into constructive activities.” ~ Hans Rosling

Hans cowrote this the book “Factfulness,”with his son Ola and and daughter-in-law, Anna.  In 2018, the book was published.

Don’t let the title fool you: this book is not just about facts.  It is part adventure story, part psychology, part biography, and pure inspiration.

In addition to eye-opening facts, this book is filled with entertaining stories of why people don’t readily see facts, and instead see the world getting worse.  This book explains why we are drawn to the dramatic and why fear compromises our ability to think.

This book is also inspiring. He shared a story of how, when he was seeking to do the right thing, colleagues misunderstood him.  With the courage of his convictions, he was able to overcome peer pressure and instead do the most compassionate thing. Hans shared deeply personal and painful stories from his life to illustrate how everyone, including well educated doctors like him, could give in to fear.   He also shares how he learned to overcome fear to face facts in order to make a better world.

“Factfulness: The stress-reducing habit of only carrying opinions for which you have strong supporting facts.” ~ Ola Rosling, Gapminder 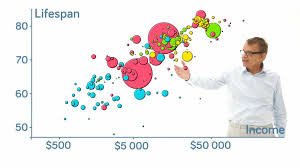 Hans Rosling made facts fun. With playful enthusiasm, Hans Rosling showed us how far humanity has progressed. By showing how far human development has progressed,  he offered us a realistic message of hope.  He turned statistics into stories that riveted us with their insights.    His data also offers guidance for where we need to focus our energies.

“As long as things are bad it’s heartless to say they are getting better.” ~ Hans Rosling, Factfulness: Ten Reasons We’re Wrong About the World–and Why Things Are Better Than You Think

Although Rosling was hopeful about the world, he was also more aware than most  of the many problems that people face.  Yet, even with awareness of suffering, Rosling saw the need to celebrate our successes and to know that human’s efforts were making the world better for people over time.

For Rosling, the ultimate kind of compassion is effective compassion.  Simply wishing to do good is different from actually doing good. And for Rosling, accurate data allows people to be more effective, and thus more compassionate.

“If your worldview is wrong, then you will systematically make wrong guesses.” ~ Hans Rosling

As a doctor passionate about saving lives, Rosling was dismayed to learn that so many people did not have accurate data about human health and wellbeing.   Without accurate facts, it’s difficult, if not impossible, to make good decisions.   “How could policy makers and politician solve global problems if they were operating on the wrong facts?” he asked.

“There’s no room for facts when our minds are occupied by fear.” ~Hans Rosling, Factfulness: Ten Reasons We’re Wrong About the World–and Why Things Are Better Than You Think

“I’m a very serious “possibilist”. That’s something I made up. It means someone who neither hopes without reason, nor fears without reason, someone who constantly resists the overdramatic worldview. As a possibilist, I see all this progress, and it fills me with conviction and hope that further progress is possible. This is not optimistic. It is having a clear and reasonable idea about how things are. It is having a worldview that is constructive and useful.” ~ Hans Rosling, Factfulness: Ten Reasons We’re Wrong About the World–and Why Things Are Better Than You Think

“Forming your worldview by relying on the media would be like forming your view about me by looking only at a picture of my foot.” ~ Hans Rosling, Factfulness: Ten Reasons We’re Wrong About the World–and Why Things Are Better Than You Think

Rosling notes that the media is in the business of selling news, not in the business of informing people. Bad news sells.  People pay attention to potential threats. When people listen to the news day in and day out, they can become overwhelmed with bad news.  The slow, steady progress of billions of people is never mentioned. That is why the Rosling wrote Factfulness, to share the good news that is overlooked.

If I were to nominate the Evolutionary of the Year, Hans Rosling would be the man.