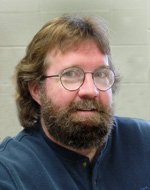 How does variation arise?  Molecular biologist, Sean B. Carroll shows how biological evolution happens at the level of DNA.

Sean is not only a great researcher with important ideas to share, he’s an excellent presenter.

Sean Carroll’s Web Site
Sean is Professor of Molecular Biology and Genetics and an Investigator with the Howard Hughes Medical Institute at the University of Wisconsin. His research has centered on the genes that control animal body patterns and play major roles in the evolution of animal diversity. Major discoveries from his laboratory have been featured in TIME,US News & World Report, The New York Times, Discover, and Natural History.

Sean is the author of Remarkable Creatures: Epic Adventures in the Search for the Origins of Species (2009, Houghton Mifflin Harcourt), The Making of the Fittest (2006, W.W. Norton) and ofEndless Forms Most Beautiful: The New Science of Evo Devo (2005, W.W. Norton). He also writes a monthly feature “Remarkable Creatures” for the New York Times Science Times.