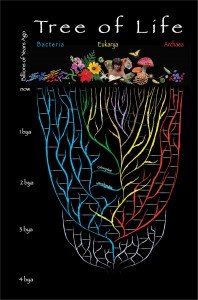 New evidence shows the Tree of Life to be more like a Web of Life.

For thousands of years and in many cultures, the Tree of Life has been a symbol of life, an icon of creation  and a map of kinship.

Over the past 175 years, scientists have created various Trees of Life that show how all creatures alive today have evolved over time.

Scientific Trees of Life, also known as “phylogenetic trees,” are based on DNA sequence similarities that show how all creatures are related  evolutionarily.

Colorful pictures at top of this tree represent the diversity of creatures alive today. Numbers along the left side indicate the billions of years before the present.  Although relatively simple and colorful, this Tree of Life image is based on data from hundreds of researchers using the tools of molecular biology. This image is based on comparisons of DNA sequences from thousands of organisms.

Originally, people thought DNA was only passed from parent to child.  Then, scientists observed  that DNA could be transfered horizontally  from cousin to cousin and species to species  within the bacteria and archaea.  Now, more and more scientists are finding examples of horizontal gene transfer between eukaryotes!  Horizontal Gene Transfer is an important mechanism for evolution. Gene transfer is so important that the eukaryotes have evolved many ways to move DNA within a species. Molecular biologist James Shapiro calls these examples of “natural genetic engineering.”

Evolution can result from the fusion of different organisms to form a completely novel creature.  This fusion is called endosymbiosis.    Endosymbiosis gave our ancestral cells the energy to become multi-cellular. A bacterium and early eukaryote merged to become the mitochondria of eukaryotes.  Endosymbiosis happened again with the merger of a light harvesting bacterium and a eukaryote to form plastids in algae and plants.  Secondary endosymbiotic events gave rise to euglena and to dinoflagellates.    Evidence now suggests that the first eukaryotes may have evolved from the merger of two distinct organisms!

Deep Time and the Origin of Life

This image provides a rough approximation of deep time. While most Tree of Life images show only about 500 million years of evolution, this Tree goes back to the beginning of life. At this scale, humans appearance is less than a pixel from the top of the tree!  Although more and more is known about how organisms evolved, the origin of life remains a mystery.  The white lines at the base of the tree indicate these mysterious first organisms.   Our Last Universal Common Ancestor, LUCA may have been a community of organisms.

Other Trees of Life

Lessons from the Tree of Life

The new, scientific tree of life offers us a wonderful perspective on how we evolved and how we all share ancestors and certain similar genes. For more lessons from the Tree of Life, click here.

An updated version of this  Tree of Life is available as a poster and greeting card at Zazzle.com.