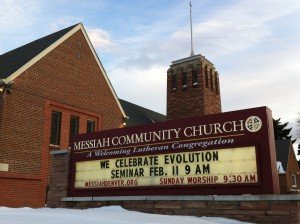 Over 1000 congregations from 50 states and over 15 countries have participated in Evolution Weekend since it began in 2006.

Every February, people around the world celebrate Evolution Weekend in community centers, churches, synagogues, temples, and mosques.  This weekend occurs near Darwin’s birthday, February 12, of each year. This weekend is an opportunity for people to reflect on the benefits of evolution science in their lives. An ongoing goal is to show that religion and science look at the same reality through different lenses.

Over 15,000 faith-based organizations have signed up with the Evolution Weekend website.  And many more churches, temples, and non-religious community centers participate informally.

Michael Zimmerman, a biologist, is the organizer of Evolution Sunday.  His quest to promote dialog between religion and science began in 2006 with the Clergy Letter Project, in which over 15,000 leaders of all major Christian, Buddhist, Jewish and Humanist denominations have signed a letter supporting the science of evolution.

People from diverse philosophies and faith traditions acknowledge that evolution is quite simply sound science. For them, the science of evolution does not in any way threaten, demean, or diminish their faith. In fact, for many, the wonders of science enhance and deepen their awe and gratitude towards their concept of The Creator.

Some churches express the message that God is present in all creation, in everything, including the process of evolution itself.

In addition to finding a  participating church for Evolution Weekend, the Clergy Letter website has sermons, lists of scientific consultants, articles, recommended readings, links to useful websites, and related news.

Jeffrey is a scientist at the University of Colorado Denver School of Medicine.  When not doing research in molecular biology, he enjoys talking to church groups about evolution. He encourages other scientists to get out into the community to teach about evolution.  Here is an article about his contribution to Evolution Sunday: Easing the Conflict between Faith and Evolution

I’ve been asked, “Isn’t the first rule of evolution that there is no God?’ I reply, “Well, no actually, that isn’t in any science textbook.” Just teaching these basic concepts puts people more at ease because they’ve never learned what evolution means. ~ Jeffrey Kieft

Just as stars, organisms, and cultures evolve, so too do religions evolve.  In his book, The Universe in a Single Atom, The Dalai Lama shares his enthusiasm for science.  He also declares his commitment to change his claims about Buddhism when science offers new evidence:

If scientific analysis were conclusively to demonstrate certain claims in Buddhism to be false, then we must accept the findings of science and abandon those claims or adopt them as metaphor.”   ~ Tenzin Gyatso – The Dalai Lama,  The Universe in a Single Atom</>